As a major supplier of sulfurized EP additives globally, Sun Chemical’s full range of products in this space include sulfurized olefins, esters, triglycerides, and fatty acids, enabling formulators to develop lubricants for a wide variety of specialty applications and use conditions.

Sulfurized EP additive performance and properties are functions of the carrier, or material being sulfurized, and the length of polysulfide chains attached to the carrier. Longer polysulfide chains result in higher activity sulfurized additives. The structure of the carrier contributes to the reactivity of the sulfur, as well as other properties including viscosity, solubility, lubricity, and stability of the finished additive.

The Dailube® IS series of products are examples of what is possible. Dailube IS-30 is a sulfurized olefin containing approximately 30% sulfur, while resulting in an ASTM D-130 copper corrosion rating of 1b at 5% concentration, without the addition of inhibitors, along with four-ball EP weld loads comparable with conventional 30-40% active sulfurized olefins. It has good solubility in most base stocks and is easily emulsified. This unique combination of properties can be exploited in diverse applications from metalworking to greases and other industrial maintenance lubricants.

At the other end of the spectrum, Dailube IS-35 combines excellent thermal stability with high reactivity at low temperatures, compared with conventional light color 40% active sulfurized olefins.

The higher reactivity of Dailube IS-35 results in low friction across a wide range of loads in four-ball tests, compared with two conventional high active sulfur content olefins. 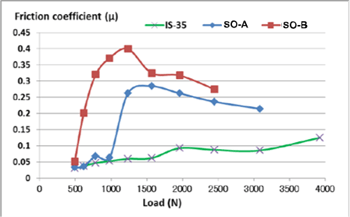 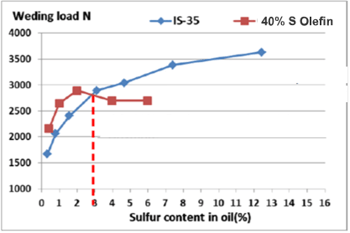 The four ball wear data below on the right shows extreme corrosive wear occurring for the conventional 40% active sulfurized olefin at sulfur levels above 3% in oil, while IS-35 shows moderate wear up to 6% sulfur content.

The Dailube GS 100 and 200, and 500 series of products include sulfurized esters, triglycerides and water-soluble materials, ranging from 11% to 16% sulfur, both active and inactive, low and high viscosity, derived from synthetic, animal and vegetable sources. Dailube GS-550, sulfurized fatty acid, may be neutralized for water solubility, while Dailube GS-560 is water soluble.

Key features of the DAILUBE range of products include:

Keep up with news on the specialty chemical industry and learn more about suppliers and applications.

Catch up on Sea-Land Chemical Company news and events.